One of the characteristics of the Italian musical scene of the Seventies, alas rather unattractive, was the delicate situation of public security at rock concerts. Shouting “Riprendiamoci la musica” (Let’s take the music back), groups of fanatics (called “autoriduttori”) used to claim the right to attend rock concerts without paying for a ticket. They always ended up in conflict and fighting against the managers who organised the concerts and the police. “The situation exploded finally on the 5th of July 1971 at “Velodromo Vigorelli” in . That night Led Zeppelin were performing there, but the main event of that happening was the extremely violent “metropolitan guerrilla” outburst between part of the “public” and the police. This happened partly because the organization tried to combine Led Zeppelin’s performance with a performance of Italian pop singers who the audience did not appreciate (to say the least!) [1], and partly because of the action of organized groups of left wing extremists that went to the concert just to provoke riots [2].

From that moment in there wasn’t a single concert of a certain importance without extremists attempting to break through the gates and fighting with the police. Tension increased dramatically in 1973. Rock concerts were enveloped by increasing violence for two years. On one side thousands of young people, on the other managers and the police. On 17th of March in protestors ended up setting fire to the “Palasport” where a concert of Jethro Tull had been organised. In 1974 the Soft Machine’s tour was marked by serious riots in Reggio Emilia and . Riots kept on raging forcing the manager Mamone to give up after a truly “urban guerilla” war on 2nd of April at the concert of Traffic. The final act was played one year later when, during a Lou Reed concert in , organized by the manager David Zard, the battle between extremists and police forces raged on until 2 a.m. [3].

There was trouble at almost every concert, not only at those of the most important bands, and for this reason the live performances of Italian bands were not very profitable (and some times even dangerous!). Lino Vairetti: - In Casale Monferrato in 1972 we were beset by a riotous, contesting group who, shouting “We want the music for free”, attacked us and the staff of the organisation, calling us fascists and wielding clubs of wood and iron, unchaining violence against us and our car, supposedly a luxury item. They targeted Elio who could have died, but he escaped luckily... In 1978, during the tour of Suddance almost all our concerts were cancelled. Because of the kidnapping of Aldo Moro, there were many check points on the roads all over the country and we were checked many times by the police [4]. Rodolfo Maltese, guitarist of Banco Mutuo Soccorso: - At the “Palasport” of one of our technicians was injured and there was the onset of physical confrontation between us and the public. Among the public there were gangs that would not listen to reason and used to carry iron clubs with them just to make trouble at every concert... Some managers began to refuse to rent theatres given the risk of riots and damages to the seats and stage [5]. Corrado Rustici, guitarist of Cervello and Nova: - They used to assault you if you dared to ask for money, I remember that once I shut myself in my Volkswagen van trying to shelter from clubs and chains wielded by some fanatics. I was a student in an in , inside the , along with other musicians. Every now and again some groups of the right wing used to come and targeted the boys with long hair, like me, and attacked them. From school to concerts where I usually found people of the left wing that acted in the same way claiming music for free... I didn’t like the atmosphere that you could find in in that period, it had nothing to do with music and I think that the people who loved music began to feel fed up with the usual riots and fighting. You had no choice but to take sides like Area or to give up [6]. 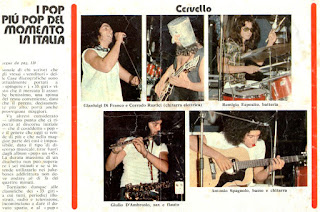 Actually, nobody was exempt from criticism and trouble, not even bands as Area and PFM or singer-songwriters committed to the left wing as Eugenio Finardi, Francesco Guccini or Francesco De Gregori. Patrizio Fariselli, keyboardist of Area: - Somebody spread the strange idea that the music belonged to everybody and for this reason it should be free. People that had made music their job, according to this idea, had to play without any remuneration because of this presumed right to the joy and amusement of a life of art and love... Who used to contribute substantially to our survival was the PCI (The Italian Communist Party) with the “festivals dell’Unità”. Without that it would have been the end [7]. 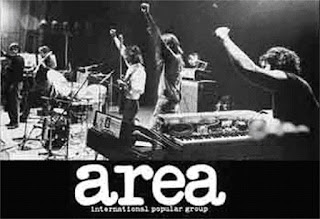 At the concerts there were often among the public those who wanted to jump onto the stage to improvise political speeches and “assemblies” about the most disparate issues. Even on the left wing there was always somebody “further to the left” who would contest and by 1976 a great deal of people began to feel fed up. On the 2nd of April 1976 at the “Palalido” in , after the concert of the singer-songwriter committed to the left wing Francesco De Gregori, some fanatics went to the point of entering backstage and compelled the artist to go back on the stage to put him on trial because “he wasn’t left wing enough”. Then, in June, during the last festival of Parco Lambro in all the contradictions of the protest movements exploded leading to acts of unprovoked and aimless violence that completely wasted what should have been only a festival for the young, full of music and joy. About 100,000 people came to attend a festival where drug addiction, solitude, material and spiritual destitution blotted out the music. The tickets were cheap but one way or another most people broke in without paying. The festival starred, among others, Area, Napoli Centrale, Agorà, Jumbo, Eugenio Finardi, Tony Esposito and Jenny Sorrenti. There were technical problems and because of the rain the place became a swamp. The crowd went completely out of control taking by surprise the organization that couldn’t manage the situation [8].

In July things went a little bit better for a festival in featuring, among others, PFM, BMS, Area, Napoli Centrale and Angelo Branduardi and organized by F.G.C.I., the youth branch of the Italian Communist Party, but the season of progressive rock in was coming to an end. For many bands this atmosphere of impending violence during the concerts was one of the main reasons to give up and call a halt to their musical experience. Eddy Lorigiola, bassist of De De Lind: - We made up our minds unanimously. There were many reasons behind this decision but two were the most important. The first one was the theft of all our instruments, the second one was an assault against us at the end of a concert when we found our van completely smashed up. We looked at each other straight in the eyes and we agreed that the only solution was to split up and give up music [9]. Giovanni Tommaso, bassist of Perigeo: - We had been together for five years and during this period we worked a lot. We came out of it completely broke because we didn’t get a result proportional to the energy we put in. It was a very hard period, many people used to go to the concerts but nobody used to pay, on the contrary, often we had to pay for the damage wreaked by the boys in the audience... [10].

Paolo Tofani, guitarist of Area: - I was tired, I couldn’t put up with that situation anymore... For an artist who was looking for new ways of expression it was very hard. We had lived some great moments, of course, but in the long run you couldn’t feel at ease, you represented something that couldn’t be understood or accepted. The Communist Party, the alternative movements of the extreme left wing, the political demonstrations, the riots, the charges of the police... I was fed up. I wished to grow as a musician and as a human being as well, so I left the band. Then I met some followers of Hare Krishna...[11].


The impossibility of regular live performances was another important cause of the decline of the Italian progressive movement, since the money from concerts and albums wasn’t enough for a professional career. Davide “Jimmy” Spitaleri and Enrico Olivieri, respectively vocalist and keyboardist of Metamorfosi: - There were many reasons for our split up... There were personal problems, problems of budget but above all we were at the end of the magical season of concerts of the early Seventies... Most of all the crisis of concerts, because for us that was our life. All in all after the release of an album what should you do? Stay at home just waiting? You have to keep on playing to grow as a musician [12]. Massimo Roselli, keyboardist of Quella Vecchia Locanda: - Someone wrote that the band split up because of personal disagreements. Well, it’s absolutely untrue. To tell you the truth, the only reason was more banal. We had to thank the crisis and the austerity policies of the government for energy saving. At the weekends there was a “traffic ban” and cars couldn’t circulate, so clubs and venues that used to organize concerts worked less and we had almost no chance to play live. It was a matter of money. Sometimes I think that we should have insisted and fought to compose, to record our music and to play together. But our destiny was different. Anyway I’m happy for what I did along with my friends for Italian music [13].

(From the book Rock Progressivo Italiano: an introduction to Italian Progressive Rock)