In 2008 two experienced musicians, Roman drummer Davide Guidoni and Alfio Costa, keyboardist from Bergamo, shared a vision and came up with a new project called DAAL (the name is an acronym inspired by the first letters of their first names). They spent together a week in a country house in the province of Viterbo, in the Cimini Hills area, putting together and recording their musical ideas, then they refined and chiselled them in studio with the help of some guest musicians. The result is “Disorganicorigami”, a debut album that was released in 2009 on the independent label Mellow Records. It's a work full of enthusiasm and passion where the musicians blend vintage sounds with modern influences and up to date technology looking for “an absolute freedom of expression”. Although the album is completely instrumental the art work by Davide Guidoni and some liner notes in some way explain what the music is about...
﻿
﻿
The short opener “Holocaustica” is about the never ending human tendency to self-destruction. You can hear screaming hooters and synthetic sounds then a threatening, distorted marching beat. There's an overall disquieting mood... “Tell me... Man... Aren't you tired of breathing death yet?”. Next comes the dark “Chimaira” that, according to the liner notes, was inspired by a Valerio Massimo Manfredi's novel of the same name dealing with Etruscan rites and a mysterious statue called “L'ombra della sera”. The guests Flavio Costa (guitar) and Cristiano Roversi (Chapman stick) add deep red colours to this excellent track... “I was only a child, but when I become a warrior I saw its eyes and lost my sense, forever...”.


“Mo(o)nso(o)n” leads you far away towards East with its frenzied percussion work and its nocturnal, exotic flavour. A strange presence is following you keeping to himself, following a path on his own... The electric violin provided by the guest Riccardo Paltanin add a touch of mystery. “Brain Melody” is another dark, hypnotic track enriched by Alessandro Papotto's Turkish sax obscure melodies... “I am the way to the night, the wanderer following the tracks of time... Dancing to the rhythm of madness...”.


The long “The Dance of the Drastic Navels Part 1” is divided into four parts and was inspired by a sci-fi story about sex between humans and machines that you can read in the booklet. The piece begins with an experimental, suggestive section, “Chapter One: Touch my oscillators”, then comes a part close to free jazz, “Chapter Two: Inside The Electronic Witch”. After eight minutes the atmosphere becomes more relaxed with the beautiful “Chapter Three: Ibrida-Ex”. The dreamy “Chapter Four: Sleeping Away” concludes the story... “And sleep caught up with him dead tired... A sleep he didn't wane to ever wake up from...”.


The short title track is dedicated to the memory of Richard Wright along with the following Pink Floyd's cover “A Saucerful Of Secrets”. Then comes “Children Of Our Dreams”, a short, delicate acoustic track featuring the guest Vincenzo Zitello on flute, viola, cello and clarinet. It's a kind of lullaby for all the suffering children all around the world... Ragnarök's cover “Var Glad Var Dag”, credited as special bonus track, concludes the album drawing other dreamy atmospheres. Well, this is a challenging album and it could be difficult to appreciate it on the very first listening but if you try again I think it can be rewarding.

Daal: Disorganicorigami (2009). Other opinions:
Raffaella Benvenuto-Berry: To be fair, “Disorganicorigami” does have its moments, and some parts of it are really good, though perhaps not extremely original. Davide Guidoni uses both Mandala drums and a conventional drum kit, which lends the album a remarkably organic sound; while Alfio Costa plays an impressive array of synthesisers, whose ‘whistling’ effects may occasionally come across as jarring... Even if not easy to pinpoint musically, “Disorganicorigami” is a formally impeccable, though somewhat one-dimensional example of instrumental prog based mainly on electronic keyboards and percussion. While it occasionally sounds a tad sterile and detached, fans of electronic and spacey prog in particular may find it a worthwhile listening experience... (read the complete review HERE) 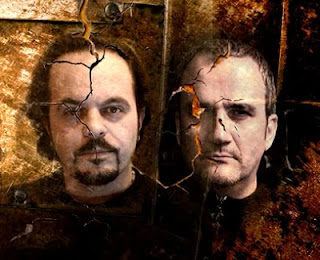 Daal's sophomore album, “Destruktive Actions Affect Livings”, was released in 2011 on the independent label Agla Records. Davide Guidoni and Alfio Costa went on with their musical project with the help of some prestigious guests such as Alessandro Papotto (sax), Guglielmo Mariotti (bass, vocals), Riccardo Pantanin (violin), Salvo Lazzara (guitar, oud), Bobo Aiolfi (fretless bass) and Ettore Salati (sitar). In my opinion this work marks a step forward for the duo. The result of their efforts is a well crafted and balanced mix of vintage sounds and sonic experiments but the experimentalism is never unfocused or invading.

The short, disquieting opener Redroom introduces the claustrophobic, tense “AnarChrist”, a piece dedicated to Giovanni Passannante, an Italian anarchist sentenced to death for a failed attack to the king of Italy Umberto I in 1878. The death penalty was commuted into life imprisonment and Passannante served his time in very hard conditions in a dark, wet cell until his death. On the following track “Noises from an Interlude” you can hear a sound of paces and a door opening. It's just a short introduction for the esoteric, almost mystic “Level 6666”, one of my favourite track on this album. Daal shot a video for this track providing evocative images for the music...


The long “The Dance of the Drastic Navels Part II” is divided into six parts. It's the sequel of “The Dance of the Drastic Navels Part I” on the previous album and begins softly with “Awake”. The second section, “Artificial Desire”, features a dreamy vocal part sung in English... “I'd like to be the wind / Caressing your face / Lost in your hair / I'd like to be fire... I'd like to be the blood inside you...”. Well, this story of sexual attraction between a man and a beautiful cybernetic-woman is rather strange. The music stirs your imagination and features many changes in mood and rhythm going on with “Inside The Electronic Labyrinth”, “Ibridance”, “Flying To You” and “The Oblivion”.


Next comes “Cry-Hologenic” that begins with a delicate, dreamy piano pattern, then the dream turns into an ethereal mystic experience with ethnic instruments and synthesizers. The following “Aglatarium” begins with a calm, jazzy mood then the rhythm rises for an unexpected finale. The long title track features an ethnic flavour and a good percussion work while the last track, the melancholic “Memories of Old Pictures”, is dedicated to the memory of a friend, Giuseppe Ottoni and features an intriguing spacey finale. The band shot a video for this piece as well...


All in all a very good album! By the way, Daal released in addition to the official edition, a limited edition featuring a box with a bonus CD that later became their third “official” album, “Echoes of the Falling Stars”.

Daal: Destruktive Actions Affect Livings (2011). Other opinions:
Assaf Vestin: This album is one of those experience albums. An album I listen to for the ambiance, the peculiar sounds and moods it conjures and not so much for the melodies. In that aspect, I find it a successful release. Its wide range of styles and sound and its exploratory nature make it an experience I enjoy and want to come back to... (read the complete review HERE).
Lee Henderson: Daal present things in a very artistic way, as each song stands like a portrait. The music here does not terrify you, but it seems to just be sad that things are the way they are, and wonders how they got like this. So while you do not have lyrics and vocals on the recording, it is still a social commentary with just the music speaking. I really liked this release and look forward to many more from Daal... (read the complete review HERE)