Il Balletto di Bronzo began life in Naples the late sixties under the name I Battitori Selvaggi. In 1970 they released a debut album in a psychedelic style, “Sirio 2222”. In 1972 they released what is considered their best album, “Ys”, with a renewed line-up featuring founder members Lino Ajello (guitar) and Gianchi Stinga (drums) along with Vito Manzari (bass) and Gianni Leone (vocals, organ, piano, mellotron, moog, spinetta and celesta). “Ys” is a concept album that was inspired by the legend of a mythical city built on the coast of Brittany and later swallowed up by the ocean. Anyway the lyrics interpret the legend in a very free way. Well, in my opinion the lyrics are not the strength of this work and here vocals are more like an instrument interacting with the band to stir emotions... There are many changes in rhythm, wonderful keyboards and guitar solos, powerful bass lines and drumming. You can find here many influences blended together in a very interesting, personal way, from classical to jazz, from avant-garde to hard rock... Actually, on the first listening you could find “Ys” a little bit boring. Foggy lyrics drawing dreadful images, gloomy vocals, anguish and fear intruding every now and again... There’s definitely a haunting, dark mood hanging over the whole album. If you’re looking for something relaxing probably it’s better to avoid it but if you’re more patient I’m sure that you’ll find that the music is rather good... 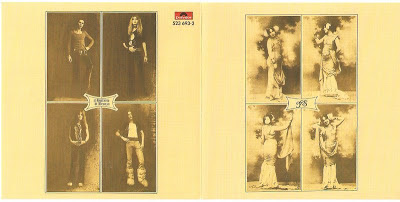 The opener “Introduzione” (Introduction) sets the atmosphere. Vocals soar like a dirge from silence, then dark organ chords come in. A supernatural voice tells the last survivor what the “true reality” is and then orders him to set off on a journey to tell everyone what he heard. The play begins... The voice pushes hard in the chest and the last man feels the pain of the things he understood, the pain of the things he experienced... “The poetry of a windy day / The last leaf of a dying tree / The first sunny day in April / A warm body, a hand close to him...”.

“Primo incontro” (First meeting) describes the first part of the journey and a strange meeting. The protagonist keeps on walking, he crosses plains and mountains and goes further and further without turning back. Finally he stumbles on another man... “A man is there with his face turned down / The ivy already covers his body / Black is the blood on the wounds of his torn ears...”. At this point, the mysterious voice compels the survivor to shout out everything he feels is dying inside him. The wind carries away the words and the protagonist becomes deaf...

“Secondo incontro” (Second meeting) starts with vocals “a cappella”. The protagonist is deaf now but he can still see under a clear sky. He can see women in the dark ready to betray or good men dying while evil and powerful ones are rejoicing. The survivor can’t stop and goes further until he meets another man with his arms outstretched on a cross. He gets closer, he can see that in the lightless eyes of the crucified man they nailed some thorns... “He felt the pain of those wounds / Then the light went out...”. Now the protagonist is deaf and blind!

“Terzo incontro” (Third meeting) and “Epilogo” (Epilogue) conclude the album. “Terzo incontro” begins with a powerful, dramatic instrumental part. With his arms stretched out the protagonist, blind and deaf now, tries to find his way until he meets a shape and touches it with his fingers. The mood becomes darker than ever... “With his hands he couldn’t sense anything but the cold of Death / His true word came out from his chest again / But his tired mouth remained motionless / The scream crushed him / It tore him apart / And the darkness around him / Then was inside him...”. And darkness was!


Il Balletto di Bronzo disbanded in 1973 after the release of a single that you can find as a bonus track on the CD version of “Ys”, “La tua casa comoda” (Your comfortable home). In the late nineties Gianni Leone reformed the band with a renewed line-up and recently I had the chance to attend one of their concerts... During the show Gianni Leone (the only original member in the present line-up) said that nowadays he finds progressive rock boring and that probably he wouldn’t release another album like “Ys”. Nevertheless they played the whole album. I didn’t find the performance completely convincing (I missed the guitar since now Il Balletto di Bronzo is a trio with only bass, drums and keyboards), but “Ys” is still the best known work of the band and I realized that almost all the public was there only to listen to it...

You can find a translation of this article into Japanese HERE

More info about the band:
http://www.ballettodibronzo.too.it/