OF LIFE AND OTHER THINGS


From the book Rock Progressivo Italiano: An introduction to Italian Progressive Rock

Stefano Testa is a “cantautore”, a singer-songwriter who in 1977 released a beautiful debut album with strong prog influences. During the recording session he played the piano and guitar and was helped in studio by the experienced arranger Franco Chiaravalle and by musicians as Marco Coppi (flute), Alberto Monpellio (moog), Cosimo Fabiano (bass), Ottavio Corbellini (drums) and the guitar trio Portici. “Una vita, una balena bianca e altre cose” (A life, a white whale and other things) features poetical lyrics and excellent instrumental parts with flute and acoustic guitar in the forefront. The result is a well crafted, balanced work, a perfect example of “prog cantautorale”, a mix of “canzone d’autore” and Italian progressive rock. Unfortunately in 1977 it was not commercially successful and Stefano Testa left the music business for a long time. This album was luckily re-discovered later and re-released in 1994 by the independent label Mellow Records that took it out from oblivion.


The opener “Una vita” (A life) is a long, complex suite inspired by the life of the Italian poet and novelist Cesare Pavese (1908 – 1950) and by his works. Cesare Pavese committed suicide on August 27, 1950 in a hotel room in Torino. His thoughts and reflections before dying are the starting point for this piece... “Albergo Roma in Turin / The summer is almost gone / In a deaf room, tomorrow they will find nothing but words / Of a whole life there’s nothing else left / But you remember now...”. Then memories from the childhood that Cesare Pavese spent in a village in the hills near Cuneo emerge while the music flows setting a bucolic atmosphere. The lyrics depict a boy walking in the countryside and discovering something new every day... “Life was something else / Made of plants, of sky / Of wind and of nothing...”. The atmosphere suddenly changes and the music almost stops for a while on organ chords while the lyrics depict the strangeness of a foreign sky and the impact of the urban landscape on the young Cesare Pavese who went to live in Turin, a big industrial city... Then the mood changes and the music becomes nervous... “The city taught me infinite fears / A crowd, a street made me tremble... ”. The city and its busy rhythm, a numb city dressed in black, anesthetized by Mussolini’s slogans and empty promises, where Pavese’s political passion is growing... “I looked for the comrades working in the factories without a smile / I loved them because I felt life was on their side... They used to shout that it wasn’t for destiny that the world was suffering... It was man’s fault”. Nonetheless during the civil war Cesare Pavese didn’t join the anti-fascist partisans, he didn’t fight and sought refuge in the hills. Later remorse haunted him for his lack of courage... The music slackens and becomes dramatic to describe a man alive but alone. Romances with the wrong women, remorse, depression lead him to commit suicide... “You wake up one morning and the summer is gone / The colour of the world has changed / The mountain doesn’t touch the sky anymore... There’s nothing more bitter than the dawn of a day where nothing is going to happen / There’s nothing more bitter than uselessness...”.

“Risveglio” (Awakening) is a melancholic, sad track describing an awful morning. Time passes by fast and steady and sometimes regret for wasted hours can be overwhelming... “How awful is the morning / When you find your dreams hanging on the ceiling / As sinners that have confessed their capital vice / And you find the obscene snake of boredom / Sleepy beside you in bed...”.

“La ballata di Achab (Moby Dick)” is a beautiful ballad featuring allegoric lyrics about a desperate quest for knowledge. It was inspired by Herman Melville’s novel Moby-Dick... “I felt as if I was a merchant dealing in fish / For sure not a hero playing with death... But when they shouted: – There’s a white whale! / I stood still, looking over the prow... I had to know what was that monster / I had to know, I wished to tame it... That whale was the sea / That whale was me as well / That whale did not exist / That whale was God...”. The atmosphere of this track reminds me of Francesco De Gregori’s “Bufalo Bill”...


“Notturno” is a bitter-sweet track featuring delicate acoustic guitars patterns and a swirling flute. The music and lyrics depict echoes of notes fading in the shadows, paper ships sailing towards imaginary seas, words breaking through from unread books, a painter lacking a colour to finish his first tableau... Well, night is the right time for dreams and illusions that time carries away!

“Difficile chiamarti amore” (It’s hard to call you love) is another beautiful acoustic track, more a song about love than a love song indeed, full of sharp reflections about love, time, family and work... “In a time that makes us wish everything / Finally your God has become the partner who helps you in your business... How hard it is to call you love, my dear angel...”.

“Il Dio sulla ferrovia” (The God on the railway) is a track in two parts that was inspired by a Jorge Luis Borges tale. In the first part nocturnal acoustic atmospheres prevail... “Tonight I was walking along the railway... Staring at the void, listening to nothing but silence... Tonight I was walking along the railway / And a high-pitched hiss from a secret God / Led my steps to a tiny point of marvellous light / Of eternal matter...”. The light unchains a stream of visions and in the second part of the track rhythm takes off while twirling flute and guitar notes embroider colourful threads all around apocalyptical lyrics... “I saw the dawn and the night... I saw endless deserts... I saw the red sun of the end on the clear walls of Hiroshima / I saw a black rose... I saw ruins, books, mountains and people, lands and silences / I saw an old blind man singing... I saw my father dying on a Saturday... And my death coming on a farther Monday...”. An excellent track that every now and again could recall “Ho visto anche degli zingari felici”, by Claudio Lolli, another famous Italian “cantautore”. 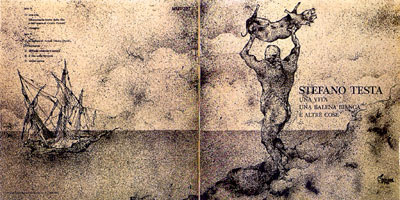 The  last track  “Ninna nanna” (Lullaby) is a lullaby for a dead child... “Ninna nanna, ninna nanna / Silence is talking about you... Ninna, nanna, ninna, nanna / This night is only for you / And my heart on your heart will stay / Until light comes...”. Beautiful female vocals and flute give a sense of infinite pity to this sad song...

Stefano Testa deserved more credit and success... Anyway, never say never! After a long hiatus he’s back in the music world, and you can find out more about him HERE

Read the interview with Stefano Testa on progarchives.com HERE