EVERYTHING HAS ITS OPPOSITE

According to the band, their main sources of inspiration stem from artists linked to the Canterbury scene of the seventies such as Soft Machine, Robert Wyatt, Caravan and Hatfield and the North. Anyway, in their music and artistic approach you can find also the legacy of an Italian band from the seventies as Picchio dal Pozzo and echoes from contemporary bands as Yugen or Breznev Fun Club. Homunculus Res' style is bold and eclectic, they showcase a great musicianship and creativity but even in their most extravagant, challenging sonic experiments they never lose the sense of melody with brilliant results. 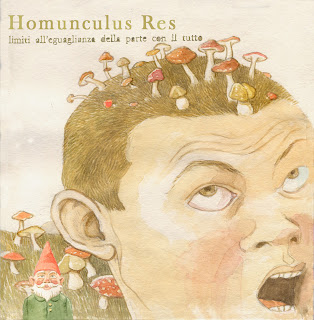 “Limiti all'eguaglianza della parte con il tutto” (the title could be loosely translated as “Limits to the equality between the part and the whole”) features eighteen tracks very different in mood and length but that flow away as if in a long suite where you can find everything and its contrary. The lyrics swing from the funny nonsense of the opener “Culturismo Ballo Organizzare” to the poignant sarcasm of “(Che ne sai tu di un) cerchio nel grano” where they jokingly quote “bunga bunga”, Lucio Battisti and Fabrizio De André.

In “Jessicalaura” the band mix Pink Floyd and Gianni Morandi in a funny, original way while the instrumental "Rifondazione unghie" recalls seventies atmospheres and an Italian band called Calibro 35. You can find a parody of a psychotic D.J. fan of Michael Jackson (“Dj Psicosi”) and an ironic love song as “La ballata dell'amore stocastico”. There's also a short quote from the “Happy Accidents” by Rascal Reporters (“Accidenti”), some echoes of bossa nova (“Estate 216 solstz”) and many more interesting ideas.

By the way, the main composer of the band, Dario D'Alessandro, is also a painter and maybe his paintings and drawings that you can find in the booklet could describe the music better than my words. Have a try!

Homunculus Res: Limiti all'eguaglianza della parte con il tutto (2013). Other opinions:
Raffaella Benvenuto-Berry: Loaded with humour and the obvious pleasure of the craft of music-making, Limiti all’eguaglianza della Parte con il Tutto is the perfect antidote to too much overwrought, self-important prog. Though the lyrics and their cultural references might be lost on non-speakers of Italian, an understanding of the words is not necessary to enjoy the album and its sophisticated yet accessible brand of “Canterbury Samba Progressive”. Highly recommended to everyone but those who believe that progressive rock and humour should not mix, or else object to non-English lyrics, Homunculus Res’ debut is a delightful, intelligent album that effortlessly blends retro and modern attitudes, with the added interest value of Dario D’Alessandro’s outstanding artwork... (read the complete revie HERE)