Flower Flesh come from Savona and were formed in 2005 on the initiative of Ivan Giribone and Alberto Sgarlato. After some line up changes, in 2010 the band began the recording sessions of their début album, Duck In The Box, with a line up featuring founder members Ivan Giribone (bass) and Alberto Sgarlato (keyboards) along with Daniel Elvstrom (vocals), Marco Olivieri (guitars) and Andrea Fazio (drums). The result of their efforts is an interesting mix of influences ranging from The Doors and Quicksilver Messenger Service to Uriah Heep, from Premiata Forneria Marconi and Le Orme to Kansas and Rush. The album was finally released in 2012 on the independent label Black Widow Records and I think it's worth listening to. 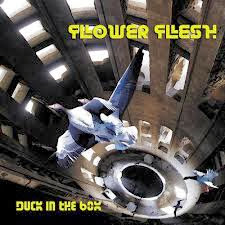 The opener “Falling In Another Dimension” is a short rock piece veined of psychedelia and full of energy that tries to take you in another space, far from the daily grind. The following “My Gladness After Sadness” begins softly, driven by a delicate piano pattern backed by an acoustic guitar. It's a long, complex track that every now and again evokes the ghost of the Lizard King and Daniel Evstrom's hieratic vocals provide here an almost mystic atmosphere. On an evocative marching beat you can see a woman's body materialize through a crystal ball... “I'm thirsty, you know / And in your eyes I can see the sea that I can't drink... The hourglass of Time stands still / We are a sinking ship / But when everything seems lost / We become energy of the universe / That's what I dream for us / You have to know it, my very sweet Mary...”. An excellent track where PFM meets the Doors. The lyrics are half in Italian and half in English and I have to say that's a real pity that the band didn't exploit more their native language. 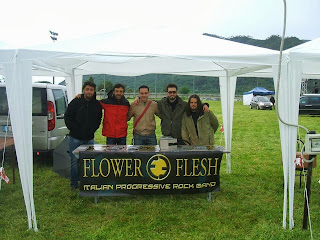 “It Will Be the End” evokes a dark night and a light in the distance on the sea, there's a desert around you where truth and lies dance in the mist while the music features a slight eighties flavour. Next comes the psychedelic “God Is Evil (Like The Devil)” that recalls The Doors. According to the band, the lyrics are about clergymen who cover with religion their wickedness. The following “The Race Of My Life” features an exotic flavour and many changes in rhythm and mood. It's another track featuring lyrics half in Italian and half in English that draw strange visions taking you beyond Moon and Time to challenge fire and wind.


“Antarctica” features a slight a new wave touch and tries to describe the icy “landscape” that forms in a house when a relationship is falling apart. The last track, the complex “Scream and Die”, according to an interview with the band, is about the Soviet war in Afghanistan and quotes some verses by Arab poets from the book “Versi di fuoco e di sangue”. It's an excellent piece and a perfect conclusion for this work.

Flower Flesh: Duck In The Box (2012). Other opinions:
Jerry Lucky: Flower Flesh are a relatively new band, having started in 2005 and as such they bring an updated sensibility to the world of Italian prog. Their sound is clearly symphonic, a kind that hearkens back to an earlier time, primarily in the sound of the instruments and also in the uncomplicated arrangements. It may take a couple of listens to pick up what’s going on here, but in the end Duck in a Box is a very satisfying set of tunes. I’m liking it more and more each time I put it on... (read the complete review HERE)
Vitaly Menshikov: The band is obviously not setting out to change the world of Neo Prog – they simply make their own contribution to the genre. Nonetheless, those who prioritize rock music more based in melody than in details will likely find the album a solid success... (read the complete review HERE).