SLEEPWALKING IN THE GARDEN

After the release of their first official album entitled Perigeo (2012), Il Giardino Onirico started to re-work on the ideas of their 2010 demo titled Complesso K. In 2013 the band released a new, enhanced version of the demo on the independent label Lizard Records with a line up featuring Emanuele Telli (keyboards), Stefano Avigliana (guitars), Ettore Mazzarini (bass), Massimo Moscatelli (drums, percussion), Dariush Hakim (keyboards, effects) and Marco Marini (vocals). The title of this new work is Complesso K MMXIII to differentiate it from the original demo recordings and in my opinion the result is excellent. 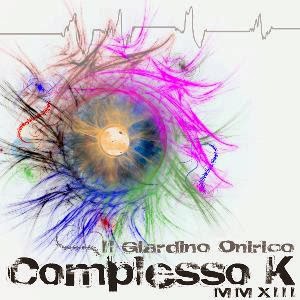 Well, the title of the suite refers to a K-complex and gives you a key to approach this work. A K-complex is an electroencephalography waveform that occurs during Non-Rapid Eye Movement sleep. According to wikipedia sources, unlike REM sleep, there is usually little or no eye movement during this stage. Dreaming is rare during NREM sleep... People who do not go through the sleeping stages properly get stuck in NREM sleep and because muscles are not paralyzed, a person may be able to sleepwalk... The mental activity that takes place during NREM sleep is believed to be thought-like, whereas REM sleep includes hallucinatory and bizarre content.

Part I and II are completely instrumental and feature a wide range of influences, from Pink Floyd and Eloy to Goblin and Pholas Dactylus. There are many sudden changes in mood and atmosphere but I never have the feeling of aimless improvisation. Lights and shadows, notes and images move in a quickening tempo like clouds in the sky. In the end of Part III the narrative vocals come back adding new evocative images... You'll sleepwalk on beaten tracks along your old steps, past and present will blur, forgotten lives and lost memories will come back, you'll live new passions and abandons... Classical inspired piano patterns are intertwined with psychedelic parts, dark organ rides alternates with brighter musical colours but the mix is always well balanced and never boring. The instrumental Part IV concludes the suite in a crescendo of positive energy... You're going to wake up!

On the whole, a very good album made to stir your imagination


Il Giardino Onirico: Complesso K MMXIII (2013). Other opinions:
Michael Aussie-Byrd-Brother: This talented group of musicians have now released two top-notch albums in a row, and `Complesso K MMXIII' shows just how much potential the band still has, while also hinting at many exciting directions they can go on future releases. Never so dark to be pitch-black and overwhelming, always with an atmospheric and thoughtful edge, Il Giardino Onirico perfectly balance frenetic energy with subtle and delicate touches, and their music is always endlessly melodic. They deliver heavy colourful instrumental arrangements played with skill and precision, and heavy prog and space-rock fans should really investigate the band right away... (read the complete review HERE)