I Marchesi Scamorza come from Ferrara and began life in 2009, mainly influenced by Premiata Forneria Marconi and Fabrizio De André. After a first demo EP in 2011, in 2012 they self-released a début album titled La sposa del tempo (Time's bride) with a line up featuring Lorenzo Romani (electric guitar), Alessandro Padovani (drums), Paolo Brini (bass), Enrico Bernardini (vocals, acoustic guitar) and Enrico Cazzola (keyboards). The overall sound is good and the band showcase good musicianship and song-writing skills although the vocal parts in my opinion are not always convincing. The influence of the Italian prog masters of the seventies and Italian canzone d'autore are apparent but there's no plagiarism and the band managed to add original ideas to their musical fabric. According to an interview with the band, La sposa del tempo is a concept album sui generis where all the tracks are linked by a common thread: Time. The lyrics are hermetic and their meaning is open to many interpretations but the album cover by Giulia Pasetti and Jacopo Regulti tries to offer some clues. 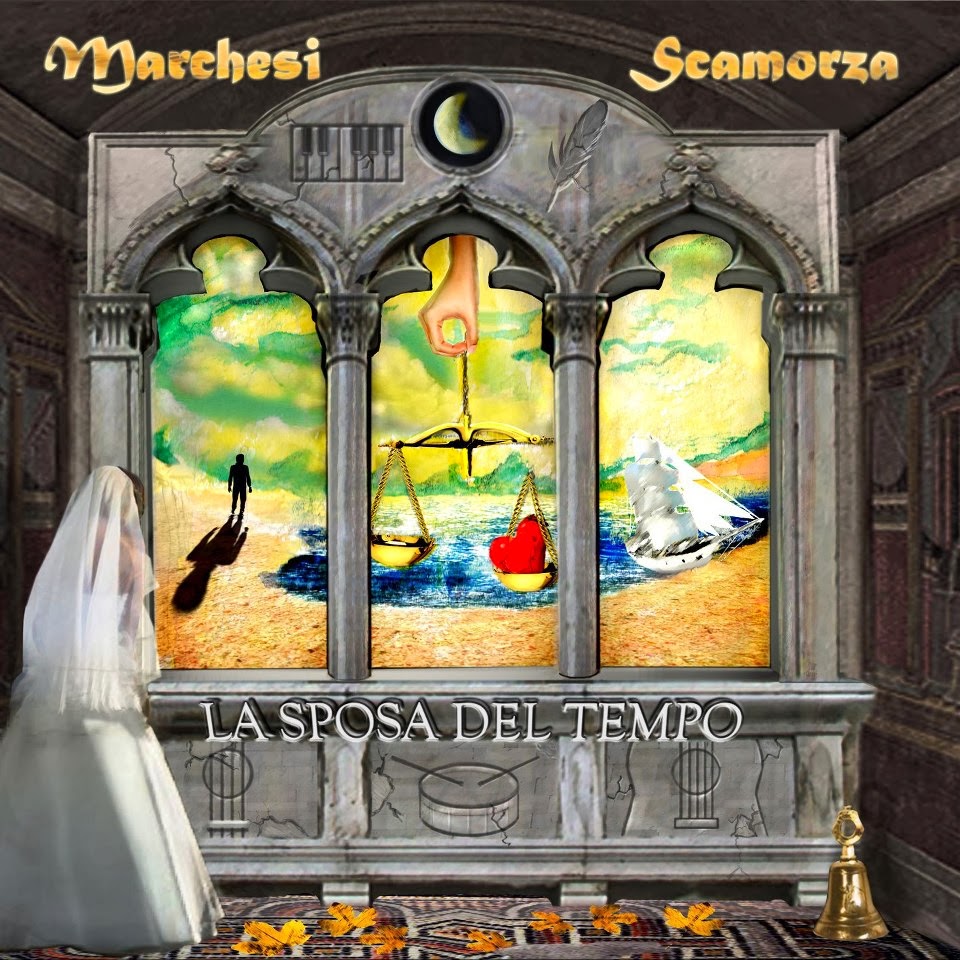 The short opener “Intro” in some way sets the atmosphere with experimental sounds and words that remind us that Time is nothing but hope. It leads to “Sentieri di carta” (Paper paths), a ballad that starts with a strummed acoustic guitar pattern. The lyrics conjure up the ghost of a mysterious, proud knight without a mouth to breath. His words get lost under his steps, ancestral fears begin to rise while you think of flying free in the night. Dull eyes are burning but everyone has got his cross to carry along his way... “Words of lead, words of of flesh / Under the churches, under the soles...”. The music is not bad but, to be honest, this track fails to strike a chord on me.
The following “Lo schiavo di Babilonia” (The slave of Babylon) is better. It begins by a delicate piano intro and features many changes in rhythm and mood. The lyrics draw powerful, poetical images of redemption and hope. Babylon here is a metaphor for a life of sin. What kind of sin? Maybe pride, adultery, blasphemy or perjury... But even a damned life can be redeemed by love! A soul that burns as paper, a lost path on the side of a huge golden tower, silent clocks inside a church... Images can speak more than a thousand words... “The balance is broken on the weight of the heart / Time is just a hope...”.


“L’uomo dall’ombra lunga” (The man with a long shadow) is reflective and melancholic. It draws the imagine of a man lost in his thoughts, ready to challenge his fate at every crossroad, following his meaningless dreams while his life slides away and stretches out behind him like his shadow.

The following “Un passo ogni parola” (One step on every word) begins softly with a mysterious atmosphere, then the rhythm rises and every now and again reminds me of Premiata Forneria Marconi. The lyrics depict an imaginary dialogue between a man and a poet about pain and fear, shadows and lights, good and evil. It's getting dark and they're walking along a solitary road, carried away by their feelings... “Poet, do not cry / There's already someone who's crying for you... Step after step you'll see the sun again along with me...”.


“Quelle volte” (Those times) is a simple, melodic track about hope and dreams. The lyrics invite you to never give up when you're feeling blue. When you're waiting in vain for a saviour, you have to open your heart and try to imagine a better world and follow your dreams... In my opinion this is the weakest track on the whole album.

“Il castello delle stagioni” (The castle of the seasons) is definitely better. It's a long, complex piece that begins with a nice acoustic guitar passage and the sound of a storm in the background. The lyrics tell about a young woman who lies in a castle where Time stands still and memories run free... “In a distant place lies a bride / Golden tears and dancing lights / Love thoughts of a thousand colours...”. Just a beautiful, timeless dream!


“Nelle notti più lontane” (In the most distant nights) tells of another dream where you can see a white ship sailing across the ocean. It's a piano ballad that fades into the more complex final track “Autunno” (Autumn) forming a kind of beautiful suite... Very brightly did the moon shine on the night I answered the call, and I walked out over the waters to the White Ship on a bridge of moonbeams. The man who had beckoned now spoke a welcome to me in a soft language I seemed to know well, and the hours were filled with soft songs of the oarsmen as we glided away into a mysterious South, golden with the glow of that full, mellow moon... Well, I think that this quote from a short story by H.P. Lovecraft, The White Ship, in some way can help to describe the content of the last two pieces, a kind of fairy tale where you can find madness and fear, hope and dreams... “Who knows what's the light of the world / This purity that turns around us / Please, take me away with these Autumn leaves...”.

On the whole this album is not flawless but features some really good tracks and it's worth listening to. In my opinion, this young band have a great potential and I'm looking forward to their next album.

Marchesi Scamorza: La sposa del tempo (2012). Other opinions:
Michael “Aussie-Byrd-Brother”: The album is far from perfect. In some spots there's probably too many vocal sections, and Bernardini occasionally has a monotonous and flat range. Sometimes he nails it, other times he's a bit strained, but it shows a refreshing honesty and says a lot about how the band support each other. I have no doubt he will keep improving, because on his best tracks here he's extremely effective. Some listeners will find the mix of different genres a bit frustrating, but most likely their next release will hopefully focus a little more on one particular style and really offer us more on an idea where they're headed. But I also have a feeling some will really love the diversity and range the band has shown here and greatly enjoy the album... (read the complete review HERE)