THE BRAND OF THE WITCH

Strigma is the fourth studio album by the Roman band Taproban. It was released in 2013 on the French label Musea Records with a renewed line up featuring, along with founder member and main composer Gianluca De Rossi (keyboards, flute, vocals), a brand new rhythm section formed by Roberto Vitelli (bass, electric guitar, synthesizer) and Francesco Pandico (drums, percussion) who replaced Guglielmo Mariotti and Davide Guidoni. According to the band, the title is a crasis that blends two Latin words: strix (witch) and stigma (brand). It was inspired by the idea of the element of fire associated with women and in some way this concept was developed through music, images and words. The album is almost completely instrumental but the beautiful art cover by Daniela Ventrone and the art work by Gianluca De Rossi that you can find in the booklet can give you a clue of what the music is about. Well, the overall sound could recall bands such as Le Orme, Goblin or Banco del Mutuo Soccorso but the band showcase great personality and freshness blending vintage sounds and original ideas... 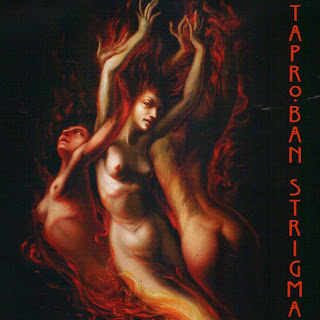 The long, complex opener "Nesia al notturno congresso delle streghe" (Nesia at the night meeting of the witches) alternates calm, dreamy passages to fiery sections where obscure energies and warm colours take you in the whirls of the infernal dance portrayed by the painting on the cover, entitled “La Danza delle fiamme” (Dance of the flames). There are no lyrics but in the booklet you can find a drawing that describes this track with a mysterious blackbird perched on the branch of a spectral tree and below some words in Latin: concurrentia ad maleficia nefandissima in genus humanum opera venefica... Welcome to the Sabbath! Anyway, do not expect black metal growls or frenzied heavy riffs, here the music goes through many changes in atmosphere and rhythm but never leaves its oneiric, almost poetical dimension and there's more mysticism than violence or luxury in this esoteric dance.

Next comes the instrumental "Lo sguardo di Emily" (Emily's glance) that starts with a sudden surge of energy. The band chose an image of Cupid's bow to describe this piece. In classical mythology, Cupid is the god of desire, erotic love, attraction and affection. His bow and arrow represent his source of power and everyone who is shot by Cupid's arrow is filled with uncontrollable desire. So you can guess that Emily is a woman burning with love and longing for a romantic waltz, her glances are like flames trying to melt the cold desert of a meaningless life... Let the music drive and let Emily's eyes draw you away for a little while!

The last track is a nearly 19 minute epic, "La porta nel buio" (The door in the dark). It's a wonderful suite divided into six parts with many changes in rhythm and atmosphere where you can listen to some fantastic keyboard passages. It starts softly, you can hear the noise of a door creaking on its hinges, the atmosphere is almost hypnotic. There's a door in the dark, but what kind of door? Are you dreaming? There's something that you can't understand... The rhythm rises, the mood is disquieting, tense. You're scared and you try to run away at breakneck speed, down the stairs... But you get lost, you're still in the dark... Will you ever see the light again? You're desperately looking for a way out that you can't find, you're freezing inside and you don't know why, you can't see where you are. Is it nightmare or reality? You're alone and Gianluca De Rossi evocative vocals lead you into the fortress of the solitude, amid rag men and broken dolls... Will you ever leave it? The last part of the suite suggests that there's a way to escape and that you can break through... A great track! Although Le Orme influence looms large over this piece of great spiritual and musical grace, this it is not a recreation of the past and the songwriting is absolutely brilliant...

On the whole, I really like this work. If you like modern progressive rock that’s based on classic prog, you really have to check this album out!

Taproban: Strigma (2013). Other opinions:
Michael "Aussi-Byrd-Brother": "Strigma" is a triumph for lovers of the usual Italian sophistication, with complex arrangements and consumate playing, wrapped in an intoxicating darker mood that's perfect for night-time listening... (read the complete review HERE)