Strato's is a musical project based in Parma that came to life in 2015 when five young musicians in love with the music and atmospheres of the Italian B-movies of the seventies joined their forces to play covers taken from the soundtracks of those films and original pieces inspired by artists such as Ennio Morricone, Franco Micalizzi, Piero Piccioni, Bruno Nicolai, Riz Ortolani, Goblin, Osanna, Carlo Rustichelli, Frizzi-Bixio-Tempera, Calibro 35 and others. The name of the band refers to The Lancia Stratos, a sports car and rally car very popular and successful in the seventies and the line up features Leonardo Barbieri (electric and acoustic guitar), Marco Mainardi (bass), Davide Sandrini (drums), Emanuele Nidi (electric organ, string machine, piano), Luis Pezzoli (percussion). After a good live activity on the local scene, in 2016 they released an interesting debut album on Retro Vox Records entitled Lo sbirro, la liceale, il maniaco (The cop, the high-school girl, the maniac), a tribute to the Italian cinema di genere of the seventies, in particular to poliziotteschi, sexy comedies and thriller/horror B-movies as suggested by the beautiful art cover by Matteo Xulli. 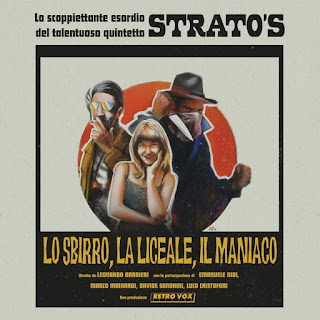 The album is divided in three parts, each one with three tracks. The first three tracks were inspired by the Italian crime films full of action, car chases and gunfights also known as poliziotteschi. The opener, "La Soffiata" (The leak) features some excerpts of dialogues taken from the film Roma a mano armata (The Tough Ones) directed by Umberto Lenzi. It starts with the call of an informer to the police. Pulsing bass lines pump tension and adrenaline... Then the rhythm rises swinging from frenzied funky rides to more calm, reflective moments. The following "Western metropolitano" (Metropolitan Western) and "Irruzione a Monteverde" (Irruption in Monteverde) are in the same vein and you can imagine bloody scenes and breathtaking chases through the streets of Rome or Milan...

The second part is dedicated to sexy comedy and the atmosphere are more relaxed. "Apertitivo" (Appetizer) is introduced by an excerpt from the film A tutte le auto della polizia (Calling All Police Cars), directed in 1975 by Mario Caiano. The atmosphere is suggestive and relaxed with a touch of mystery in the background. A short excerpt taken from the advertisement of an Italian beer leads to the light-hearted "Un goffo pretendente" (A clumsy pretender) featuring a lively beat and funny melodic lines played by Luca Cristofori on kazoo. "Rossella" (featuring the seducing vocals of the guest Rossella Finardi) closes the trilogy dedicated to eros and drives us to thanatos...

The last part of the album is dedicated to the dark, tense atmospheres of the Italian horror/thriller films made famous by directors such as Dario Argento or Lucio Fulci. "Chipsiomega" is a clear tribute to Dario Argento's film Profond Rosso (Deep Red) and to its soundtrack by Goblin. In fact, Chipsiomega was the temporary title of Profondo Rosso... This piece is an authentic ride through recurrent nightmares and hidden fears and features also some excerpts from the film Solamente Nero (The Bloodstained Shadow) directed by Antonio Bido in 1978. The disquieting "Delirio paranoide" (Paranoid delirium) and the melancholic closer "Titoli di coda" (Credits) complete the scene full of wild energy and delicate surprises.

On the whole, a very good album that is really worth listening to.