So Does Your Mother come from Rome and have been active on the local scene since 2009. The aim of the band is mixing the complexity of progressive rock with the simpler rhythms and glamorous atmospheres of disco music. In 2013, after many line up changes, So Does Your Mother self released a studio EP entitled Fac(e)ing the Animals and in 2015, after a long, hard work with producer Marco Molteni, they finally released their first full length album, Neighbours. The line up features Lorenzo Sidoti (guitar), Vladimiro Sbacco (keyboards), Gian Maria Camponeschi (bass), Alessio Zappa (drums), Francesco Antonini (flute, vocals), Letizia Lenzi (clarinet), Carmine Di Lauro (sax), Francesca Faraglia (vocals), Domitilla Masi (vocals) and Maria Onori (vocals) but during the recording session they were helped also by some guests such as Isaac "Ike" Willis, an American vocalist and guitarist who was a regular member of Frank Zappa's studio and touring bands from 1978 to 1988, and vocalist Ghita Casadei. The artwork by the well-known street artist Mr. Thoms describes in some way the theatrical and ironic musical approach of the band... 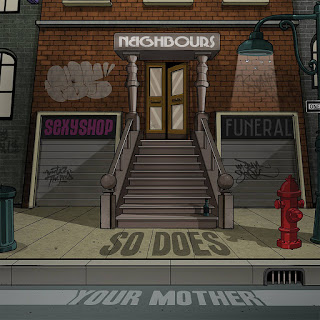 The opener, "Mitile Milite" is a lively track with surreal lyrics sung in ancient Latin. It starts softly, with the dark notes of a clarinet, then the rhythm rises and the mood changes mixing funk and folksy flute passages à la Jethro Tull. Then comes the sarcastic "M.D." (festuring the guest Ike Willis) that depicts in music and words a greedy, unscrupulous manager exploiting new bands trying to make them play for free.

Next comes "Swallow", a ferocious attack to the distorted use of social media where everyone can vomit words and trash online while the suggestive "Modern Seducer" is a surreal portrait of a stripper man under the lights of a discotheque, a very peculiar exotic dancer crawling almost naked on the floor for the amusement of women...

"Under the Roof" is a tense piece in seventies style. Here the atmosphere could recall the scene of a thriller film score where spiders and scorpions are moving under the roof... It leads to the funny, irreverent funk of "Your Mother". The following "Red Leaf" is a short, surreal track about the life of a very peculiar character watching TV on a bumble bee with sax and slapping bass lines in the forefront. "Modern Seducer Reprise" closes the album with a different, more relaxed version of the fourth track.

On the whole a funny, interesting album where the band showcase good musicianship and excellent song-writing skills.

Email ThisBlogThis!Share to TwitterShare to FacebookShare to Pinterest
Labels: LAZIO, Rome, So Does Your Mother