“Verità nascoste” (Hidden truths), the eighth studio album by Le Orme, was recorded in London in October 1976 with a renewed the line up featuring Aldo Tagliapietra (bass, vocals), Michi Dei Rossi (drums), Toni Pagliuca (keyboards) and a new guitarist, Germano Serafin, who took the place of Tolo Marton. The album should had been produced by Vangelis but since there was no feeling between him and the band at length Le Orme chose to work without the help of an “external producer”. Eventually the final the result was not bad at all for an album released when the Halcyon days of progressive rock were gone, swept away by new fashions.


The opener “Insieme al concerto” (Together at the concert) is a kind of mini suite about the feelings of the public before and after a concert: curiosity, happiness, the magic of the music hanging on after the show until dawn... “I’m walking towards the sun / I will keep in me such a sweet night until tomorrow / I will have to half-open my eyes / And let reality drive me away...”. A good track with an interesting instrumental middle section.

“In ottobre” (In October) is about the time the band spent in London during the recording sessions. Le Orme found that London had changed for the worse since their last visit and they were very disappointed by the different atmosphere, the different music, the different people and the different fashion... “Who carried away the people from Carnaby Street, from King’s Road, from Hyde Park, from Piccadilly Circus? / Music, where are you?”. Anyway the music here is dynamic and powerful and the new guitarist perfectly interacts with the rest of the band.


“Verità nascoste” (Hidden truths) is an amazing acoustic ballad, dreamy and poetic... “I would like to gather your world / And set the great dreams free / And colour your drawings / With desperate white nights / And laugh like someone who is winning his life in a losing game...”. You can find here the seeds of Le Orme's 1979 masterpiece “Florian”, the music is clearly classical inspired and there’s a string quartet interacting with the band.

According to some old interviews with the band, “Vedi Amsterdam” (See Amsterdam) deals with the problem of drug addiction. The mood is dark, the music obsessive and even aggressive in some passages but the lyrics are no explicit and the impending sense of death is concealed behind a merciful veil like a “hidden truth”... “Mothers don’t know / Why their sons go away / They go back to Amsterdam / Just for another trip / I would like to burn my ticket / But the show goes on again / The point where the wind dies is sad / The blades form big crosses / And the wind comes back / The wheel’s still in spin / Obligatory holiday / Please stop someone in time!”.

“Radiofelicità” (Radiohappiness) is one of my favourite tracks on this album. It's introduced by simple guitar chords that then give way to a more experimental sound. The lyrics are about the “peculiar feeling” between a man and his radio... “Don’t worry if I’m like that / Nothing can change me / I don’t run like you, desperate / Following the chances you can find / Don’t try to understand / If I spend my days listening to the world / Don’t look at me in surprise / There’s no room for you among my beautiful things / I have a friend locked inside my radio / And when I’m sad he makes me happy...”. 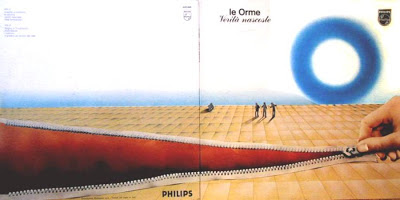 “I salmoni” (The salmons) is another good track “against the stream”, with the members of the band that seem to identify themselves with the salmons... “You know, we have to do so / Keep on going up, against the stream / Up the river, to reach the source / We have to do so / It’s an ancient desire that pushes us / And nothing can change our crazy idea / We could fall on the bank after a jump / We could hit the head against the rocks / We could be hooked in the back / But we have to keep on going / To arrive where the sky is closer / Because that is the place where our children will come to life...”.

Well, on the whole “Verità nascoste” is not the best album by Le Orme and you can’t find here really outstanding tracks but the average quality of all the pieces is high and it's really worth listening to.


More info about the band:
http://www.leorme-officialfanclub.com/