Think Tank were formed in Bari in 2015 by Lino Paglionico (vocals), Fabio Prota (keyboards), Gennaro Piepoli (guitar, vocals), Davide Vacca (bass) and Gese Marsico (drums). According to the band, their influences range from seventies progressive rock to the more modern sound of artists such as Steven Wilson and Porcupine Tree. In 2017 they self-released an interesting eponymous EP featuring a nice art work by Arianna Operamolla and five original pieces sung in English with a strong leaning  towards AOR. 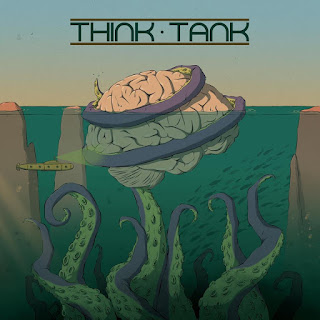 The opener “Joe The Joiner” is a lively, sarcastic piece about a bigot man and his unfaithful wife, Mary. The theatrical vocals feature the collaboration of the guest female singer Rossella Antonacci who plays the role of the cheating woman. Then comes the funky “Dreary Anxious”, a track that tries to open a window of hope in an idle present made of pills and needles. It shows that the best antidote against depression is love...

Next comes the reflective, melodic “Serendipity”, a calm, dreamy piece that draws a line between past and future and tries to drive you through a world where all the dreams are made of sand and stones… The light, short “Fool You Are” and the dark, ironic “The Dark Inside The Fool” close the album with some good shots of tonic energy.

Well, Lino Paglionico and Fabio Prota were both members of another band called Assenzio that in 2005 released an excellent album entitled ‘Avon. For this new project they chose to sing in English but in my opinion it’s a pity that they didn’t exploit more their mother language… Maybe next time!

You can listen to the complete EP HERE