J’accuse..! are an interesting band from Trieste that was formed in 2001 by Sasha Colautti (vocals, lead guitar), Donald Paljuh (vocals, guitar), Michele Scherlich (bass) and Raffaele Tenaglia (drums, percussion). According to the band their many influences range from King Crimson to Mars Volta, from Area to Tool... Nonetheless during the years they have played together they seem to have found their own way and on their debut album “Abbandono del tempo e delle forme”, released in 2008 on Mellow Records, they blend progressive rock, psychedelia and post rock with a very original, mature personal taste building and shaping timeless “musical forms” upon evocative lyrics. The result is excellent...

The album opens with a spacey intro leading to the long, complex “Il tempo muta le forme” (Time changes forms). Some guitar lines give a touch of “Balkan flavour” to this piece while smothering vocals shape a desperate timeless prayer that breaks through invoking freedom from an inward desert made of evil and banality...

“Sul bordo dell'abisso” (On the edge of the abyss) is another very interesting long track that seems to depict a nightmare... “Confused memories do not help the eyes / Lost in a sea of thousands fears / It’s as you can’t breathe anymore / It’s as if you can’t feel the ground under your feet... I’m dreaming / I see angels falling like tears across the sky...”. The mood is claustrophobic and heavy but never boring (there are even a few moments that slightly remind me of Goblin’s “Profondo Rosso”) and the band showcase here a very good musicianship.

“L’angelo” (The Angel) and “Cercando un punto lontano” (Looking for a distant point) are shorter than the previous tracks but no less interesting... “L’angelo” was inspired by William Blake’s poem The Marriage of Heaven and Hell and is a track full of energy with heavy guitars in the forefront, while “Cercando un punto lontano” is calm and “reflective”... “I’m running faster than the wind... I’m tired of seeming like a ray reflected in the void / I’m still here...”.

The long, complex “Ricorre l’abbandono” (Abandonment recurs) is frenzied and melancholic, by far my favourite track on the album. It features a good jazz guitar solo by the guest musician Andrea Massaria and it’s a perfect finale to a very good work... “I feel inside me the rotten branch to pull it out / Destroy the soul, forget me! / Clean your feelings then bury me...”.

J’accuse..!: Abbandono del tempo e delle forme (2008). Other opinions:
Jim Russell: This is an album for anyone who thinks there's no original rock and roll left on the landscape. This is not simply a "progressive rock" album for the traditional "prog" crowd but also just a great rock fix, something not to be taken lightly in a time when the media exhorts us to be excited over yet another U2 or Coldplay album and the public dutifully laps it up... (read the complete review HERE)

At the moment, after some line up changes, the band is working on a new album. I’m looking forward to listen to it!

dell’Alchimista is an Italian prog band from Bergamo that was formed in 1997 by Michele Giardino (vocals, acoustic guitar), Davide Donadoni (bass) and Michele Mutti (keyboards) who were later joined by Norberto Mosconi (drums) and Silvia Ceraolo (flute). The members of the band managed to shape their own original compositions following the great tradition of classic Italian prog bands as PFM, BMS and Le Orme while adding their own personal touch and an up to date sound. Their eponymous debut album was released in 2001 by Kaliphonia and the result is excellent.

The beautiful opener “Eclisse” (Eclipse) features piano, drums, organ and flute leading to a tense and “dusty” atmosphere... “The air is filled with human fear / Drums run after the beating of the hearts... A blade writes on my belly the scream of the people / And the impassive stone drinks blood and vigour...”. The lyrics depict a human sacrifice during an eclipse of the sun. Well, when listening to this track try to imagine the scene of the sacrifice in the 2006 Mel Gibson film “Apocalypto”... Anyway the acoustic guitar brings a sense of hope in the end...  “A new light is rising / And it will heat pale and frail shapes...”. A kind of soft, delicate awakening after a nightmare!

Next comes “Delirio (In Do Minore)” that is full of “crazy energy”, while the third track “La torre dell'alchimista” (The Alchemist’s Tower) is a kind of timeless musical journey featuring many changes in mood and tempo: the lyrics tell of a kind of pilgrimage towards a place where you can come out from madness... “Step after step your goal is nearer / You have walked along the fields / And the voice of the river was leading you... Now your journey has come to an end / Here they cure every illness / Now you are in the right place / That’s the alchemist’s tower... Master, cut away the stone / My name is Lubbert Das / I come from a village in the plains / Beyond the river, beyond the walls / I come to cure my folly / Your fame is great / Even far away from here...”. Probably - in the booklet there’s no reference to it - the lyrics were inspired by a painting of Hieronymus Bosch, “The Extraction of the Stone of Madness (The Cure of Folly)” where you can find the words “Meester snyt die Keye ras - myne name is Lubbert Das” (Master, cut away the stone – my name is Lubbert Das). At length, however, this piece sounds just like another wonderful “musical painting” and the voice of Michele Giardino is like a brush adding touches of colours to the music! 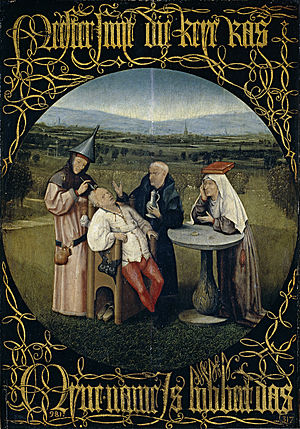 “Il Volo” (The Flight) is a soft, dreamy acoustic ballad featuring nice flute work. The lyrics and music try to depict an imaginary flight over a beautiful Irish landscape, “beyond the horizon that you can never reach” and in “fogs sweet as honey”. A nice track followed by “L’apprendista” (The apprentice), a piece full of energy and “brio” that was built upon a theme taken from a symphony for organ by Camille Saint-Saëns... “My world has got a soul too / Simple laws, fragile signals...”. Then the organ introduces “I figli della mezzanotte” (The Midnight Children), another good track featuring a mild, particular Middle-Eastern flavour... “For every snake there is a staircase... Victim and master of my time / I will live inside a tired body...”.


“La persistenza della memoria” is a short, classically inspired piano solo, a delicate interlude that precedes “Lo gnomo” (The gnome), another beautiful classically inspired track where flute and keyboards play joyfully leading you to a fantasy world... “Once upon a time there was a merry spirit / Owner of the wood / Master of the river / He used to live serenely in an enchanted mushroom / Sleeping, smoking and drinking his wine...”.

The  last track, the melancholic and  introspective “Acquario”, is a perfect finale for an excellent album... “Liquid world lost in a drop / That patiently shapes nature again / While time slowly passes by / And in the water everything is silent / I can hear only my voice...”.

dell’Alchimista: dell’Alchimista (2001). Other opinions:
Conrad Leviston: If an Italian retro-prog band sounds good to you on principle, then this album is a safe bet. Time signature changes, keyboard pomp without circumstance and solid songwriting are the order of the day here. And, to my pleasant surprise when I went back to review this album, it appears to have grown on me... Despite all the dissenting opinions, this album deserves to be seen for what it is: not necessarily original, but a well-crafted album nonetheless... (read the complete review HERE)