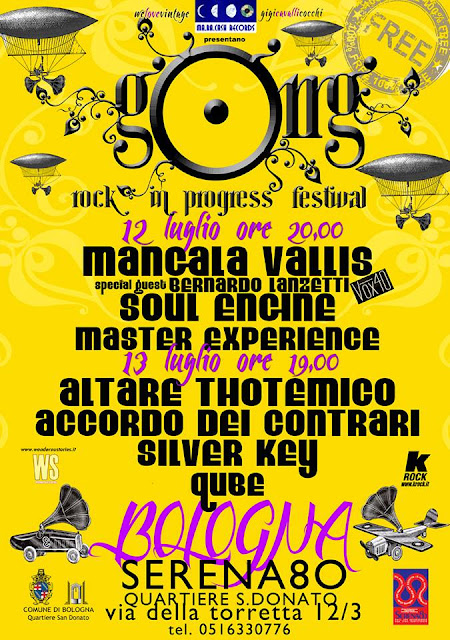 Find out more prog concerts in Italy:
http://arlequins.forumfree.org/
http://www.progdates.net/
http://www.hamelinprog.com/calendario-eventi/
Posted by andrea at 11:45 No comments:

Procession are an Italian prog band from Turin that was formed in 1972. In their debut album, “Frontiera” the line-up featured Gianfranco Gaza (vocals, harmonica), Angelo Girardi (bass, electric mandolin), Marcello Capra (electric and acoustic guitar), Giancarlo Capello (drums, percussion) and Roby Munciguerra (electric and acoustic guitar). The album was recorded in just a week in Rome and was released on the Help label. The music alternates hard, raw passages with electric guitars in the forefront to delicate, reflective atmospheres where acoustic passages prevail. It’s a concept album that deals with the problem of immigration from Southern Italy to the North and its industrialized cities like Turin or Milan. The lyrics were written by Marina Comin, the same lyricist as Raccomandata Ricevuta Ritorno’s “Per... un mondo di cristallo”.


The opener “Ancora una notte” (One more night) starts with an acoustic guitar arpeggio, then the electric guitar and the rhythm section bring in a dark sense of impending change. The lyrics describe the last night of an emigrant before leaving his native village for the big city and an uncertain destiny... “One more night and the train will set off / But in this last night I can’t sleep / I’ve waited too long for this day / Now I’m scared / I fear that my life could end there...”. The body is going to leave but the roots are not yet broken and this contrast is underlined by the music.

“Uomini e illusioni” (Men and illusions) starts with a fiery electric tarantella (that could recall PFM’s “E’ festa”). The lyrics describe the train carrying its burden of men and illusions while running through Italy, from South to North, men who feel strangers in their own Homeland... “I will have to live my life / Like a clown compelled to smile / Even when his son is dying / I can’t show any pain...”.


“Città grande” (Big city) opens with a delicate acoustic arpeggio, the music and lyrics describe the arrival in the big city and the feeling of pain for family and home left behind, the struggle for a job, then the feeling of hope for a better world and society where people can survive without leaving home... “Big city I’m here... I left my mother, my girlfriend and perhaps my joy to live / But hope makes me go on / And I will live of hope...”.

“Incontro” (Meeting) is a joyful ballad featuring strummed acoustic guitar and flute. The music and lyrics describe the meeting between the protagonist and a boy about twenty years old. The boy talks about friendship, love, freedom and equality... “We’re all alike / You can find a thousand friends / If you look for them with your heart / There are no limits / If you live in love...”. 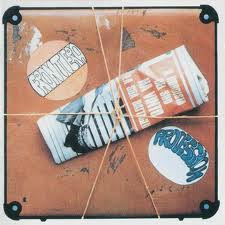 “Anche io sono un uomo” (I’m a man as well) is a delicate, melancholic track about equality and awareness. The protagonist thanks the boy for the new hope but then there arises an awareness that not everyone thinks in the same way... “How many people treat me like a man and don’t judge me? / How many people understand that I’m a man like you?”.

The long, complex “Un mondo di libertà” (A world of freedom) is more aggressive. It starts softly but then fiery electric guitars start storming enraged notes. Then the vocals come in while the tension slackens... “You have lost your freedom / But I’m not speaking with you just out of pity / There’s a whole world around you that loves you like me / It’s true that everyone here minds just his own business / But you are a man and you’ll find your way...”. The lyrics are a kind of sermon against resignation, all in all every place is the same and life is not so bad...

“Solo 1” (Alone) begins as an electric rock and roll... “Alone again, alone again in the big city / You look around you / Trying to understand where to go...”. Then rock and roll melts into something very different and moody...

“Un ombra che vaga” (A wandering shadow) begins with hard guitar riffs shaping a troubled, desperate mood... Then comes a sudden change of atmosphere and acoustic guitar and vocals describe what seems to be just a wandering shadow, a living ghost... “Your future life is like a dark shadow / You see your hopes in the eyes of the night / Houses seem big but they are colourless / You would like to be at home / But you can’t come back....”. Then, on “Solo 2” rock and roll and loneliness are back for another desperate ride in the big city... “Alone again, alone again in the big city / You look around you / Trying to understand where to go...”.

Hopes and disappointments, rage and love, friendship and loneliness, hard rock and acoustic passages... On the whole a very good album with good ideas and some ingenuity. Well, now the wish to go away from the hectic city life rises... “Away from here, away from here!”.

La Seconda Genesi came from Canino, a small town in the province of Viterbo, and was one of the many Italian progressive rock “one-shot bands” of the seventies. The leader of the band was guitarist Paride De Carli, who, along with drummer Sandro Leoni, from 1963 to 1969 had been playing in clubs and on cruise ships. From 1969 to 1971 Paride De Carli spent two years in the Bahamas Islands playing with a local multi-ethnic band and when back in Italy he released an album with a band called Paride e gli Stereo 4, “Naufrago in città”, on the independent label Picci Records. In 1972 he joined again with Sandro Leoni and with Nazzareno Spaccia (bass), Giambattista Bonavera (sax, flute) and Alberto Rocchetti (lead vocals and keyboards) formed La Seconda Genesi. The band released only one album, “Tutto deve finire”, also on Picci Records, before split up. In that period progressive rock was very popular in Italy and “Tutto deve finire” is just one of the many Italian albums in that vein, with the musicians trying to blend many influences, from jazz and avant-garde to hard rock and classical music. 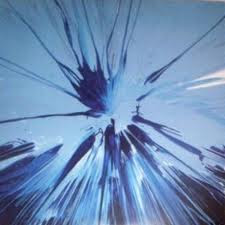 “Tutto deve finire” (Everything must end) is a concept album featuring lyrics by the producer Giuseppe Cassia dealing with religious issues such as the faith in God and the awareness that everything is bound to come to an end except your soul. The instrumental opener “Ascoltarsi nascere” (Listening to our own birth), is an experimental piece where the band, with the sound of the sax in the forefront, try to blend jazz and avant-garde with rock. The following “L’urlo” (The scream) is another instrumental, a jazz-rock track featuring a great saxophone work. It ends with a short organ solo that marks a change in mood and atmosphere.

Next comes “Se ne va con noi” (It goes away with us), with a “sinister” drum and organ intro, a piece closer to the gloomy mood of Il Balletto di Bronzo’s “Ys” than to Weather Report. On this track the voice of Alberto Rocchetti reminds me slightly of Gianni Leone... “Life dies with us / With a lament life goes away / It goes, goes, goes away with us / The wind blows in the sky but the sun can’t rise / Around us the air is going to die too / And people don’t know when to set off / And people don’t know where to go...”. A good track although in my opinion it's not at the same level of “Ys”!

“Dimmi Padre” (Tell me Father) in my opinion is the best track on this album. It’s the more complex piece on the album and the band try to blend classical influences and hard rock. You can find here echoes of Osanna, Delirium, Le Orme and New Trolls – or, if you prefer, of Jethro Tull, especially because of the flute... “Tell me Father / Why do you not wonder any more about what you’re doing? / You have been starving all along your life / Your faith is great but you will not help your people / It doesn’t matter, my father / Anyhow there’s always God...”. Dramatic vocals soar over a melting pot of different influences... 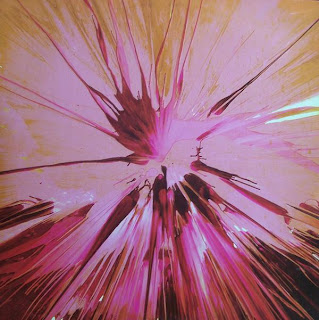 The following “Breve dialogo” (Short dialogue) is a short instrumental with a good interaction between classical guitar and organ. It leads to “Giovane uomo” (Young man), a track closer to hard rock that recalls Osanna’s first album. Next comes “Un'infanzia mai vissuta” (A never lived childhood), a quiet instrumental piece built upon a classical guitar arpeggio.

The album was re-released by Akarma Records in 2002 along with the previous album of the guitarist Paride De Carli with the “Stereo 4”, “Naufrago in città” (two albums on one CD). “Naufrago in città” is a completely instrumental album with most of the tracks built upon classical guitar patterns with flute and organ drawing calm, dreamy melodies. 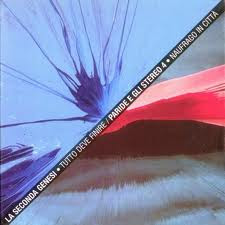 Well, on the whole “Tutto deve finire” might not be considered an outstanding album but I think it's really worth listening to. Bye the way, the original vinyl version of this album is extremely rare and precious for “vinyl collectors” because of the particular art cover featuring random jets of colour (actually, there’s a different album cover for each one of the first 200 vinyl copies). 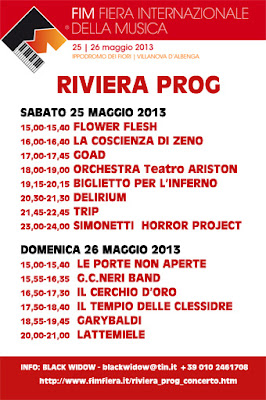 
Find out more prog concerts in Italy:
http://arlequins.forumfree.org/
http://www.progdates.net/
http://www.hamelinprog.com/calendario-eventi/
Posted by andrea at 08:05 No comments: