Giardini d’Autunno (the name means Autumn Gardens) is mainly the brainchild of multi-instrumentalist Tiziano Rea, from Sora, a town in the province of Frosinone. In 2002 an album entitled Frammenti di idee perdute was released under this brand on the independent Mellow Records label with a line up featuring along with Tiziano Rea (guitar, bass, Mellotron M400, Hammond B3, synthesizer) also Andrea Scala (drums) and Emiliano Germani (vocals). The art cover, taken from a tableau by Antonio Notari named Paesaggio marino (Marine landscape), in some way depicts the musical content and its rarefied, dreamy atmospheres... 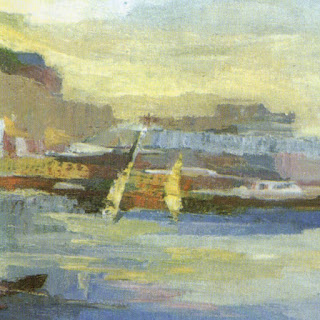 The opener “Preludio: il principio di non contraddizione” (Prelude: the principle of non-contradiction) sets the atmosphere with its hypnotic ticking on the wings of time and leads to the long, complex “Visioni trascendentali” (Transcendental visions), that every now and again could recall King Crimson and is divided into three parts, “Il sogno” (The dream), “La caduta” (The fall) and the mystic organ finale “L'ascesa” (The rise).

The evocative “Interludio - Parte Prima” leads to the disquieting, exotic realms conjured up by “Frammenti (di idee perdute)” (Fragments – of lost ideas) for an oneiric journey on camel back through the cinematic lands of Goblin. Then, “Interludio - Parte Seconda” drives you back to safer territories.

The nervous “Radius” might be a very good score for a thriller film full of darkness and mystery while the following “Sulla linea del cielo” (On the skyline) is ethereal and dreamy and in my opinion could fit better a story filled with sensuality and romance...

The beautiful epic “Storia vana” (Vain story) is the only sung track of the album. The visionary lyrics evoke distant horizons and a man running against the wind, trying to overcome the ancient challenges of humankind. While pointless games deceive his ever hanging dream, he looks for a clue, for someone who can show him where the strength of live goes. Strange images and drops of madness, legendary distances, useless miracles and uncertain fates, a stream of ideas and blurred memories flows through perilous waterfalls. You can see a confused crowd lost in the mist, look for easy money and listen to significant words. Then the music and lyrics evoke the image of a wise man painting an unpredictable future, but beyond the myth there’s a current of air that keeps on pushing you up and up... Eventually the melancholic instrumental “Coda: visioni ascendentali” (Coda: ascendental visions) ends the album.

On the whole, an interesting work that needs more than a spin to be completely appreciated.

Frammenti di idee perdute (2002). Other opinions:
Chris "Seventhsojourn": There are several moments of excitement and aggression but overall the album is the musical equivalent of the cover art, being an intimate setting of hazy soundscapes... (You can read the complete review HERE)