Giorgio Piazza, nicknamed “Fico”, was one of the founder members of Premiata Forneria Marconi. The bassist left the band in 1973, replaced by Patrick Djivas, and went under the radar for a very long time... It wasn’t until 2012 that he came back on stage with a new project called Per Fare Musica (the name means “to play music”, but in short it’s P.F.M.) gathering around him some talented young musicians to reinterpret and perform Premiata Forneria Marconi’s early repertoire. After many concerts around Italy, in 2019 they recorded live in studio their versions of the pieces taken from Storia di un minuto and Per un amico with a line up featuring Giorgio Fico Piazza (bass), Eric Zanoni (guitars, vocals), Riccardo Campagno (keyboards, vocals), Giuseppe Perna (keyboards, vocals), Marco Fabbri (drums) plus the special guests Marco Colombo (lead guitar on two tracks) and Annie Barbazza (lead vocals on two tracks). The album, entitled Autumn Shades, was produced by Max Marchini for Maniticore Productions Ltd. and released by the independent label Ma.Ra.Cash Records with a beautiful art cover by Lino Budano. 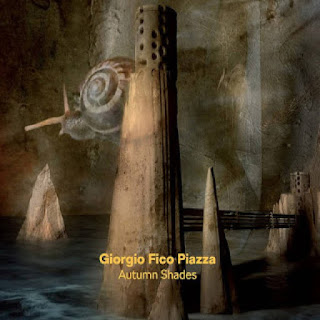 Although the track list doesn’t follow the same order of the original albums, all the pieces are reinterpreted with philological pragmatism, great musicianship and freshness. The fruit of the recording sessions is a pleasant immersion in the atmospheres of the past with updated arrangements that respect the spirit of classics such as “Impressioni di Settembre”, “Il banchetto” or “E’ festa”. The sound quality is excellent and I think that this album could be a good starting point. In fact, there’s no new original material on it and I hope that in the future this project will bring us new pieces and creativity, not only perfectly crafted exercises of style. All in all, Il Tempio delle Clessidre started performing the old repertoire of Museo Rosenbach with the original vocalist of the band and ended up releasing some wonderful albums of their own original music... Well, I hope that Giorgio Piazza and his new bandmates will follow their path!
You can listen to the complete album HERE
More info:
https://www.facebook.com/Giorgio-Piazza-musicista-235578316527603/
Posted by andrea at 15:41